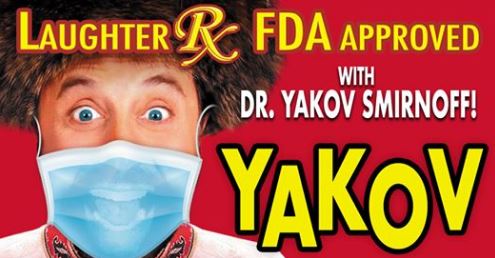 Since his 1992 arrival in Branson, Missouri, famous Russian comedian Yakov Smirnoff has played host to over four million visitors. The entire show and venue reflects this inspirational comedian’s unique insights into life, family, and these United States.

Yakov’s movie credits include “Moscow on the Hudson” with Robin Williams, “Brewster’s Millions” with Richard Pryor, “The Money Pit” with Tom Hanks and “Heartburn” with Jack Nicholson and Meryl Streep. His many television credits include Showtime’s ACE Award nominee “Yakov Smirnoff from Moscow…Idaho,” as well as his own 1986 syndicated series “What a Country.”

In addition to his comedy, Yakov is also an accomplished artist. While he holds a degree from a prestigious Russian institute and has taught the subject professionally, Yakov (whose work can be seen throughout the theater) uses his paintbrush now as a means of furthering his philosophy. His work was featured in a New York art expo in early 2001 and is further evidence of the breadth of his creative talent. The painting that Yakov completed just after 9/11 has been displayed at Ground Zero in New York City.