A fun, lively music show sure to send you home with a case of the disco fever!

It’s a show that will bring you back in time to an era overflowing with disco-era music, fluid dance moves, and glittery V-Neck shirts just screaming for attention. This show is none other than the brand new Back to the Bee Gees performance, where three of Branson’s finest come together to celebrate the glorious music of the Bee Gees with their own powerful voices and style.

After watching Back to the Bee Gees last week at Hamner’s Variety Theater in Branson, our team chatted with two of the three performers, James Allen and Stephen Odom, to talk more about the show, the music, and the absolute power of disco.

See the full interview below! 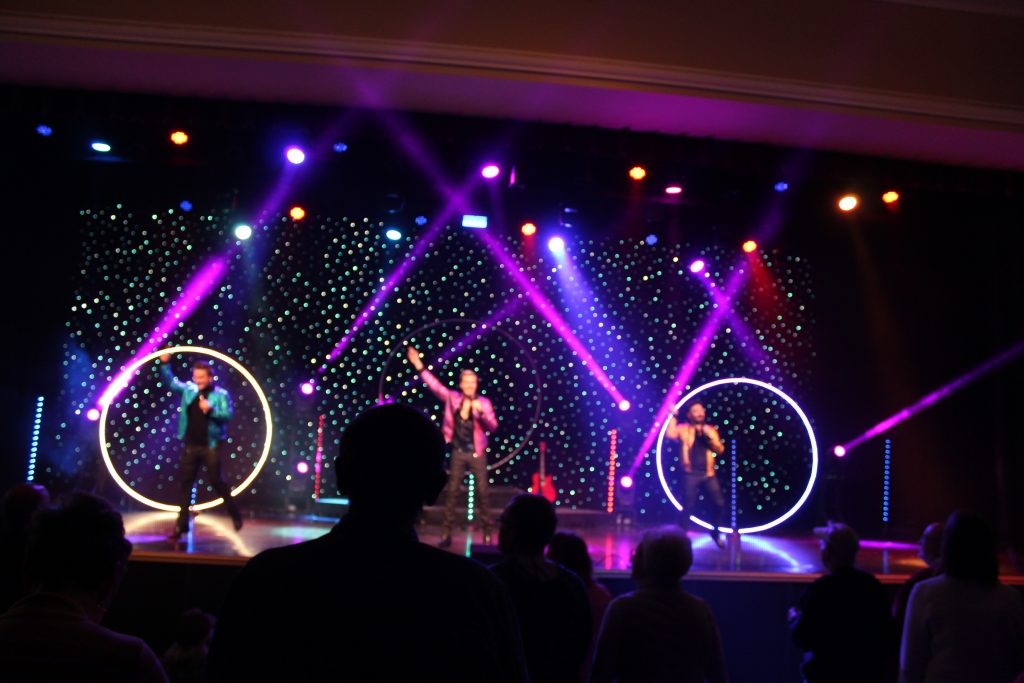 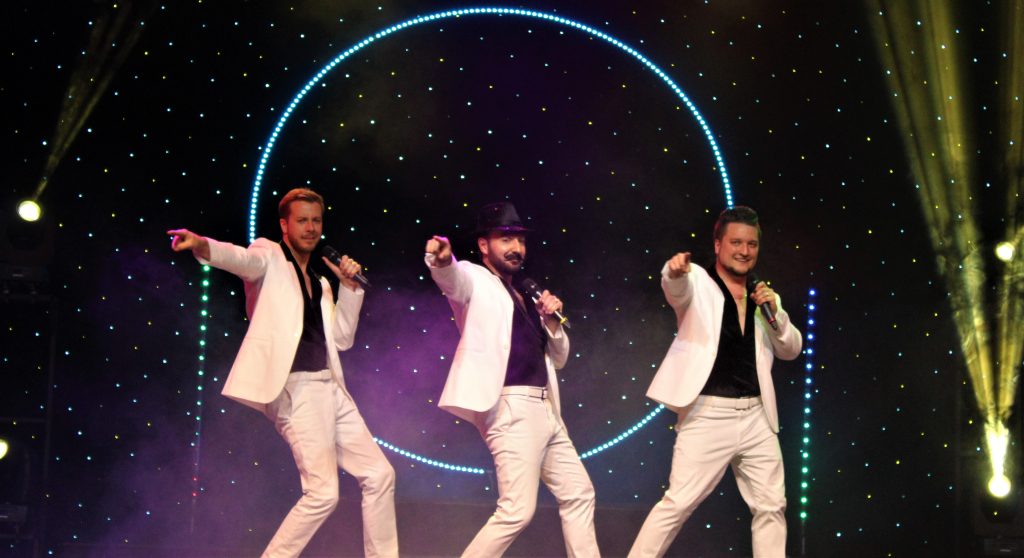 Tell us about your new show and its reception.

James Allen: “ Everybody seems to love the Bee Gees music! Essentially, our show is a musical journey of the Bee Gees’ lives and careers. We also do a whole segment of songs that the band wrote for other people. Overall, we’re getting positive feedback.”

Stephen Odom: “ The way we approached it was we didn’t want to be impersonators. We decided we were going to sing the music as ourselves and, when we do that, that allows us to do other things you may not hear at a typical Bee Gees tribute. Like, you probably wouldn’t hear ‘Islands In The Stream’ or ‘Grease’ if you’re going to see guys with bad wigs and fake chest hair. We thought it would be cool to bring our own personalities and we are ourselves up there celebrating.”

James: “Right. It’s not an impersonation, it’s a celebration.”

How did you meet?

Stephen: “James and I have been working together for over five years now. We knew we wanted to cross over into the producing side of things and there’s a lot of successful acts in this town, but the Bee Gees wasn’t here. I always loved their music, and I think we just felt like it would be a good hole to fill in town. Over the years of working with ABBA and Beach Boys, I felt James and I had both gained the necessary skills to produce this kind of show. We knew together, as a team, we could pull together an exciting, new show for town. We knew after the pandemic, it would be a strange time to try to do something like this, but we thought it might be a good year to do it. So far it’s been pretty good for us. We have fun, we enjoy what we do. None of what you see on stage is fake. We don’t put on an act, we’re all friends. I’ve even known Michael Frost for over ten years now so, when James and I were trying to find who we should have, it was a no-brainer. We knew we wanted Michael. He is amazing.”

James: “Rehearsals were pretty easy because there were only three of us. The harmonies were pretty much set. We’re all seasoned performers so we knew what we were doing.”

Stephen: “We all brought a different creative eye to the show. James and I obviously had the bulk of it done but then, when Michael came in, he had his own ideas and brought his own take to it.”

Do you recall the first time you heard the Bee Gees?

James: “It was ‘Saturday Night Fever for me and hearing ‘Stayin Alive’ where you see the iconic scene of John Travolta walking down the street. Their music really is the fabric of society.”

Stephen: “I feel like I’ve always known it. I feel like there was never a time where I heard it for the first time because their music is everywhere. In our intermission videos that we show, the music is in every movie and in every tv show, and there’s so many parodies of people walking down the street with the music. It’s everywhere.”

What about the original trio of brothers really resounded with you as a performer?

James: “They were so mega-famous and had screaming fans everywhere, but the Bee Gees were essentially just nice guys from Australia that were just like ‘Yeah, we’re just singing songs and having a good time.’ I think that’s why people loved them even more – because they were just really down to earth.”

What’s your favorite part about performing in Branson?

James: “You know what? It’s the people. In Branson, you actually get to meet the people who come to see your shows, so you get to make a connection. People come up to us all the time to tell us stories about their favorite songs or where they heard that song and that’s a way, aside from the applause (which we all love), to feel like we’re making a difference. It’s about letting people forget about life just for a day or just for a moment. Last year was terrible for everyone, so that’s why we wanted to bring a show that was lighthearted and let people forget about everything that is going on and have fun. People reliving their memories and their lives, I really enjoy that.”

Stephen: “ I think these shows, especially in this theater in general, where we get to have that interaction with the audience. We really want to talk to people. We really want to hear their stories, talk to them, and learn about their memories. The fact that we get to live our dream and perform, amazes me. I’m just honored to be able to do it honestly. We are very fortunate.”

Any changes/updates/announcements for this upcoming season?

Stephen: “ Our goal is to start small and grow. Every year, we’re hoping to change the songs, change the costumes, update things. We want to be around for a long time, so we definitely hope to grow and make things better and better and better. So, if you come and you love this show now, come back next year and you’re going to love it even more.” 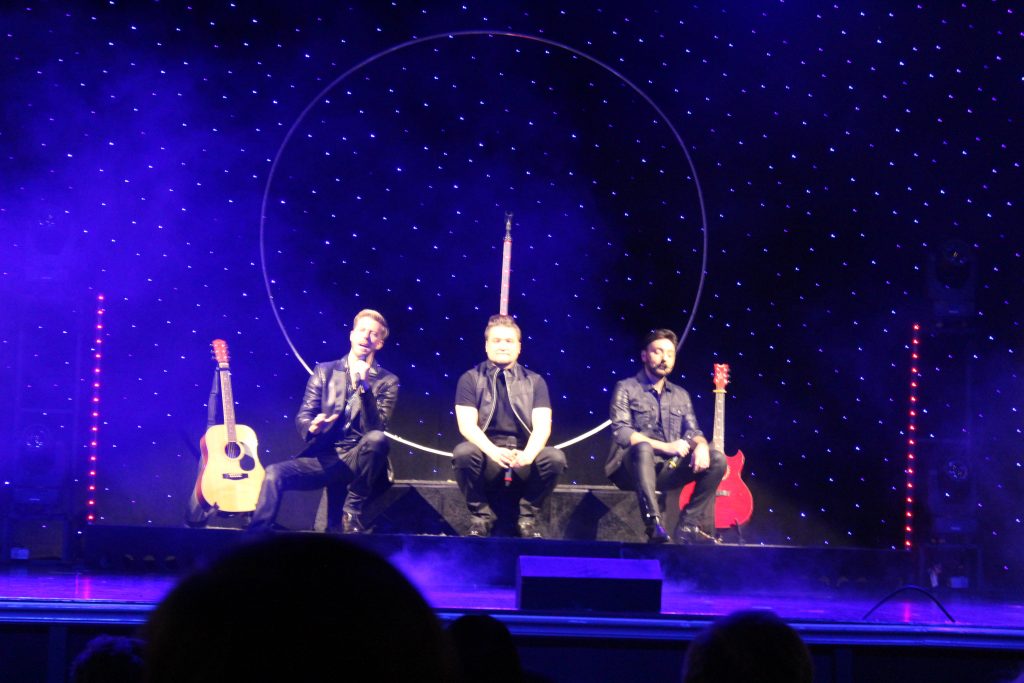 Some of the songs performed during the show:


What others are saying about ‘Back to the Bee Gees’:

“So happy to see a NEW and exciting show in Branson. These guys have worked so hard to bring true entertainment with a fresh twist and they NAILED IT! Prepare yourselves to be amazed by the talent!” – Cadence M, Tripadvisor

“Absolutely loved it! Enjoyed the music and the history of their career, including hits that they wrote for other people. They also highlighted the hits of their brother, Andy Gibb. I highly, highly recommend it.” -Katsabella, Tripadvisor

“Even if you aren’t a super Bee Gees fan, you will have a great time! The guys are SO talented, and genuinely nice people! Super high energy and high-quality show. Follows their career from the 60s all the way to the 2000s, with some fun surprises! You’ll be dancing!” Krbo_Re_, Tripadvisor 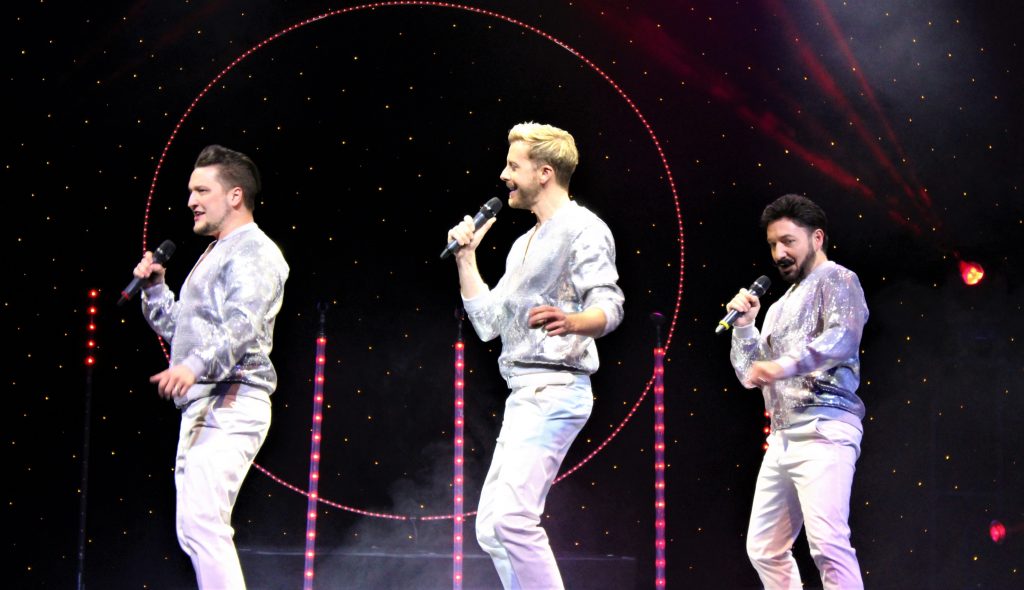 For more information on Branson, Missouri Shows, Attractions & more give us a call at (866) 876-4339 and ask how to secure the best tickets at the lowest prices! Please find out more about Branson Travel Packages on our site here.

Top 21 Things to Do This Christmas Season in Branson, Missouri | 2021